Sometimes projects take longer than anticipated. This project, as predicted will be running into a third post as we have yet to encompass all of the original scope.

following the initial test fitment of the front section of the plenum, the model was slightly altered. The inlet trajectory was modified to direct more precisely towards the inlet behind the headlight on the vehicle. 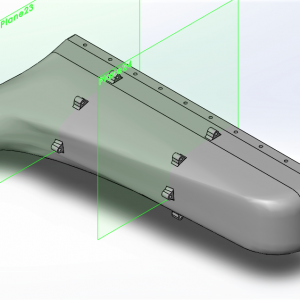 After modifying the inlet location, final features were added to the model, including mounting holes and split section features. The initial scope for this project included the production of both a complete plastic air-box, as well as a carbon fiber substitute. Due to the size of this air-box, the 3d-printed structures would have to be completed in sections.

The all-plastic structure was created in three sections. Each section bolts together through five fastener tabs. The mating faces feature gasket grooves to allow for a leak proof final assembly. Below, the detail of the section face can be seen when broken along one of the two split planes. 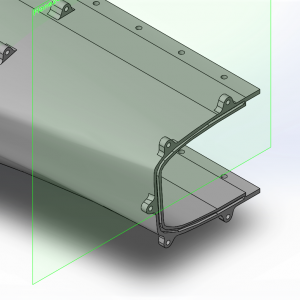 The aluminum base plate was modified to include mounting holes for the plenum. A slim aluminum flat-bar frame was tacked into the inner perimeter of the base plate. This gave us material in which we could drill and tap the hole pattern that the plenum would be fastened along. 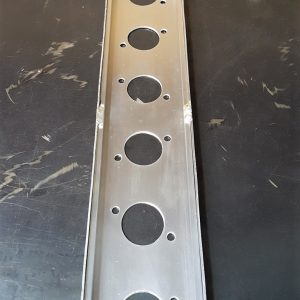 Below, all three plastic plenum sections can be seen mocked up on the base plate. Upon final assembly, the grooves on each of the sections mating faces were filled with gasket maker, providing a proper seal between the three sections. Unfortunately we perpetually lack the foresight to take proper photos, so we currently have no photo of the final plastic plenum assembly. 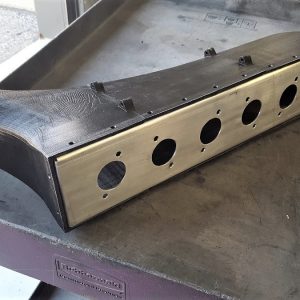 Each of the three plastic sections were printed with a fairly heavy hatch to ensure the best possible rigidity but also maintain print quality. On very large prints, if a near solid print is configured, it is quite common to have warping and print quality issues.

The printing of these sections is extremely time consuming, so we used fairly conservative print settings to reduce the potential of having to repeat sections. There is nothing like walking into the shop after 30 hours of printing and finding a ball of scrambled filament to start your day off right.

Following the completion of the plastic plenum assembly, we started on the molds for the carbon fiber version. Below, the outer mold is shown. The inner shape of this mold is identical to the outside surface of the actual plenum.

Next we will be working on the internal mold. The internal molds outer surface will be identical to the internal shape of the actual plenum. Both mold assemblies require a great deal of manual finishing after printing. Any imperfections in the mold surfaces will directly impact the surface finish of the carbon replica.

Ideally we will be using only the internal mold for the carbon replica. We plan to seal the internal mold and lay the carbon over the shape, finishing the layup with a vacuum bag system encasing the entire assembly. If an acceptable finish is not attained through this process, we will try using the outer mold with a reversed set-up. 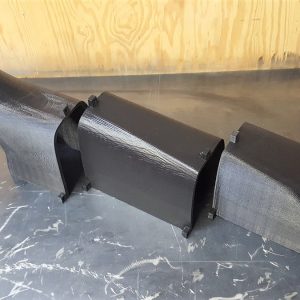 The plastic air-box is now on the vehicle and its longevity will begin to be tested. Our hope is that it will last in its operating environment.

Stay tuned for the final update of this project, when we complete our fully printed carbon fiber mold set-up.