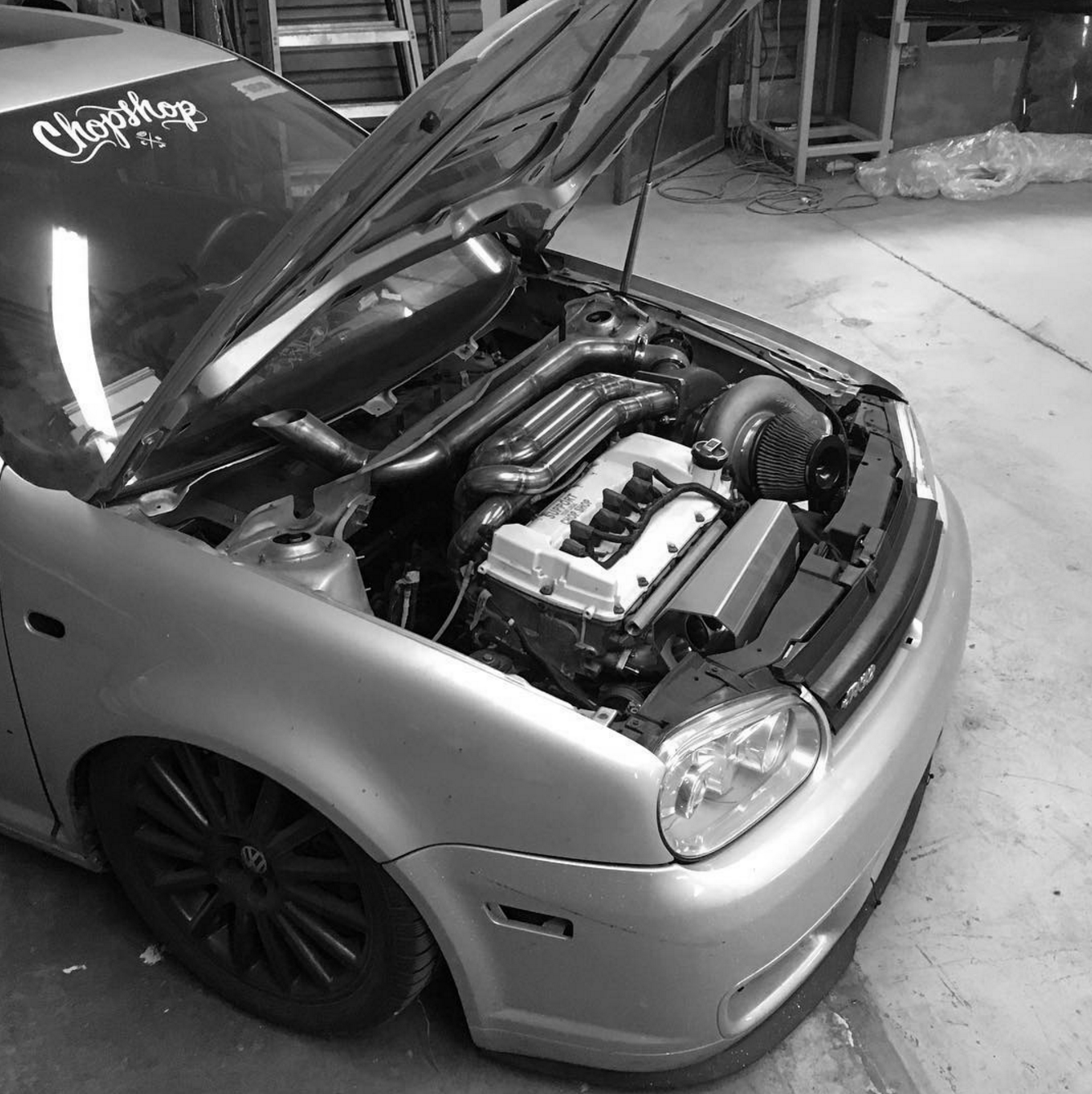 Generating Some Flow With Chopshop

I find some of the best projects start off with a murky idea for the finished project, but the requirements of being over the top and crazier than what any one else has done. Enter, the Chopshop R32.

From what I gather, conception to present day, the goal of this wraith is to be the best and the biggest of everything possible for a street/strip/show R32.

Our focus on this project was to help design and manufacture an intake manifold that was going to have the volume and packaging necessary to house all the boost coming from that family sized turbo. 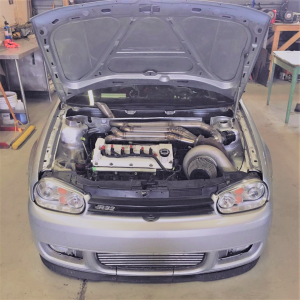 We set out to create an intake that would not only deliver the performance and look that we wanted, but also prove to be an assembly that could be produced economically. The initial issue, which would prove to be an ongoing issue, was that of spacial constraints. The R32 being a 6 cylinder, all wheel drive hatch-back means that replacing factory components with performance oriented products can be quite tricky. Our initial rendition featured a fairly complex head flange which eliminated the use of runners between the flange and plenum. 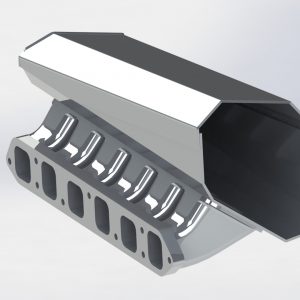 We whipped up some prototype pieces to get onto a head and into the bay. Having a 1:1 tangible prototype always helps verify that you have not overlooked any interference with other parts. 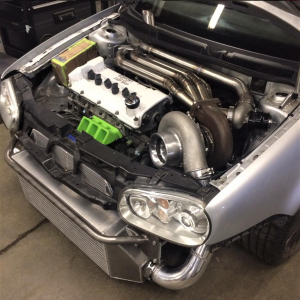 After tweaking the head flange a few times, we arrived at a finished piece we were happy with. Removing the runners allowed us to attain the perfect plenum to head port merge geometry. However, we were not completely satisfied with this concept as our flange design was fairly complex and machining this sort of piece would be far from easy. 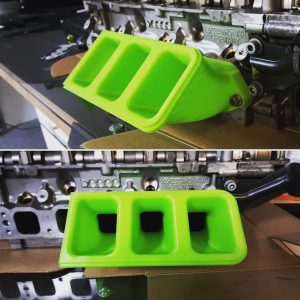 Upon some brainstorming we decided to pursue an alternate design, to reduce the complexity of the machining that would be required for this project. A radial plenum base plate, merging into runners mating to a standard flat plane head flange was drawn up. 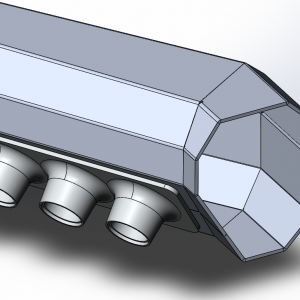 This assembly was proving to be fairly compact and running basic flow analysis, it proved to perform as well. The plenum base plate is a simple, yet effective piece. It was designed with a raised main face, to ensure the inner faces of the sheet aluminum plenum and the base plate remain perfectly flush. The runner mating faces are finished with a similar step to make pre-weld assembly effortless. 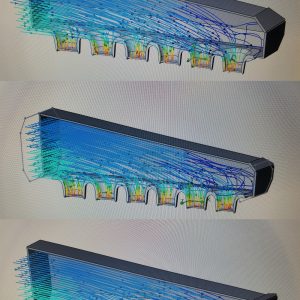 Moving forward we had the plenum base plate milled out. Now we could mock up the runners mating the head flange to the base plate. Given the cylinder layout and single head design of the Volkswagen VR motors, the head port spacing is quite minimal. This meant that we had very little room between our runner ports on the plenum base plate. As seen below, the final design was slightly altered as there was no room to squeeze an end mill of respectable diameter between the ports. 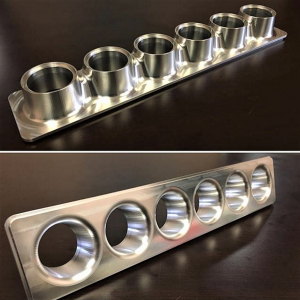 With the base plate and runners mocked up, we were starting to get somewhere. Even with just the base plate hanging off the front of the motor, it is clear how little room there is to fit the plenum necessary for that turbo.

The main plenum is cut and formed from .125″ thick aluminum sheet. All the main body joints of the plenum overlap each other. Upon final welding, the inner seams can be stitched together for added support, so that when Chopshop is merging onto the highway at rush hour, the intake doesn’t open up like a ripe banana.  Below the initial mock-up of the main plenum and runners is shown. 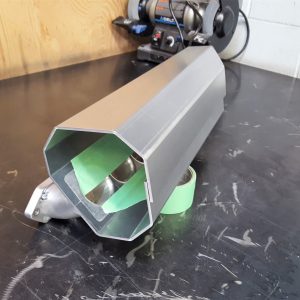 Mocking the plenum up in the car, we have success, a completed unit is now in sight. Some massaging of the factory rad support was always going to be on the books when trying to develop such a large plenum. 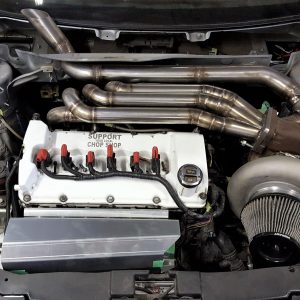 Back to the spacial constraint issue, we arrive at how we planned to finish this intake. We could have made sacrifices in plenum size, and simplified the entire assembly from the beginning, but that sounded underwhelming and just not, us. So, to arrive at a solution with the desired plenum entry geometry and throttle body position, we came up with one of the more complicated sheet aluminum pie-cut style assemblies you will see. Seems ridiculous? perhaps, but the finished product speaks for itself. 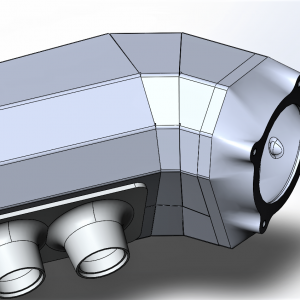 Two sets of formed pie-cut plenum body sections were created to land the Bosch throttle body in prime real estate for mating up with the charge piping. A bespoke tapered throttle body flange was milled from billet aluminum, which mates perfectly into the body of the plenum. The mating edge of the throttle body flange is stepped, just like the plenum base plate, This provides not only ease of assembly, but also adds rigidity to the entire construction. 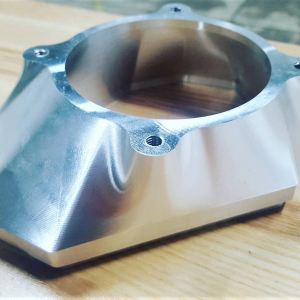 Below, a rough mock-up of the entire intake can be seen. Utilizing, both billet machined components and formed sheet bodies, this intake is a part that certainly stays true to the nature of the Chopshop R32. 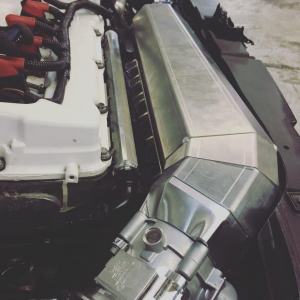 Sitting on the end of the intake is a large bore Bosch electronic throttle body. To provide a mechanical mate from this throttle body to the charge piping, a Magnus Motorsports Adapter is used. This part allows a v-band or similar clamping system to be used on the larger Bosch throttle body units.

Final welding and porting of the intake is currently in the works. Stay tuned for final results and more updates as Chopshop works towards the completion and first start of this monster.

Be sure to check Chopshop out on Instagram and always; Support Your Local Chopshop!