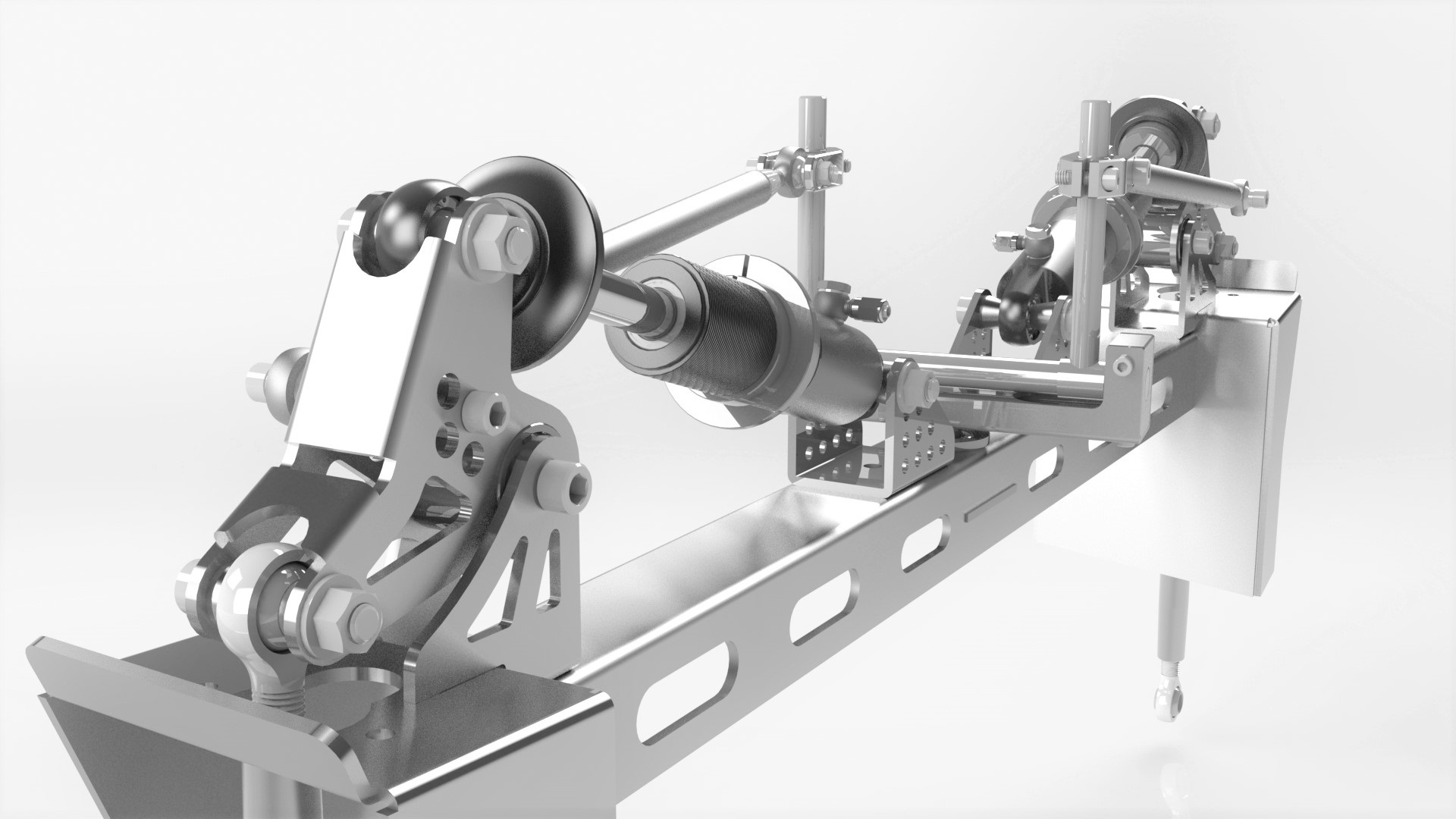 If You Can, Why Not: E30 Pushrod Project

Periodically an idea is ripped from the ether which at first, seems ridiculous and unnecessary, but later comes raging back through your mind like an Encierro Bull Run. In recent times we have been slowly toiling away on a design to put a proper push-rod suspension set-up in the back of an e30 chassis without getting the sawz-all fired up.

In reality this project spawned when we decided to make one piece laser-cut and formed rear strut tower boxes for e30’s. The purpose being a simple, quick chassis reinforcement for true coil-over installation in the rear of an e30. With the task of creating rear body support, it was easy to progress into the idea of adding provisions for a push-rod set-up.

Push-rod suspension designs feature many advantages over conventional strut/hub style suspensions. One advantage, is moving bulky components inwards on the vehicle. Why is this important? The first reason (which is very prominent in Formula style cars) is that compacting all vehicle systems can be critical to maintaining a narrow body (not quite applicable in the e30 uni-body we are stuck with). A second, more important reason, is to reduce the polar moment of inertia of a vehicle, which for all you engineers out there is simply expressed as “J”. J, lets call it, refers to an objects ability to resist torque. The classic thought experiment for J is thinking of a bar-bell. If you increase the bar length and move the weights further from the centre of the bar where your hand is holding the bar-bell, the unit becomes more difficult to spin. Alternately, if you move the weights inward it becomes easier to spin. The value of J is based on the distribution of mass in an object and how far the various sources of mass lie from the overall centre of mass of the object (this applies in both the X and Y directions on a 2D plane, i.e. front to back and left to right). Thus, a greater value of J results in an object which is more difficult to turn. 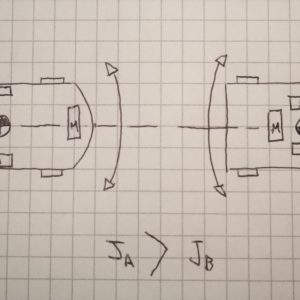 Examples of reducing J in a vehicle are seen in the most basic design decisions in motorsport where mid-engine platforms are utilized and as many components as possible are located in the most centralized locations. Please excuse my phenomenally terrible hand sketches, I have yet to be accepted into the local community art class.

A second advantage to utilizing a push-rod suspension is somewhat related to the previous point regarding mass control in vehicular systems. In a push-rod system the “unsprung mass” of the vehicle is reduced. The unsprung mass in a vehicle refers to all the components which move with the road – under bumpy conditions, turning, braking, etc. (i.e. wheel, tire, brake system). “Sprung mass” refers to the rest of the vehicular mass which is connected to the road through the spring only. By introducing a “rocker” between the spring/damper and the wheel upright you remove the spring/damper from the unsprung mass (replaced only by a lightweight push-rod) as you are no longer generating inertia swinging a spring/damper around when the suspension actuates.

Think about the above sketch where mass-2 is larger. It will be more difficult to control and resist the motion (caused by external forces, i.e. road surface disruptions) of mass-2 about its rotational centre than it will be of mass-1. Much like the “bar-bell” example used in the vehicles polar moment of inertia point, reducing the inertia the spring/damper must overcome to control its appendage (unsprung mass) the better it will perform. 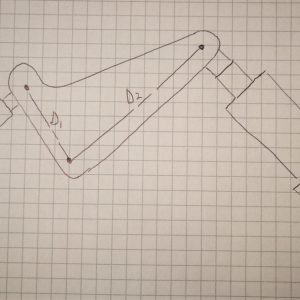 So, back to e30’s. As previously mentioned, this project started with the need to create rear strut tower reinforcement boxes. This is where we started. We designed our strut boxes to be laser cut and formed from a single piece per side. We produced 3-D printed prototypes for each side and revised until we were satisfied with how our parts would fit the factory chassis. These boxes are the base and main structure in which this assembly will be housed. With perfect fitment achieved, these boxes will be easy to install and weld into the e30 chassis. 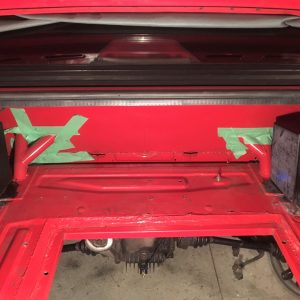 With our basic mounting structure designed, we took constraint measurements which we would require for designing this suspension to fit in the trunk of an e30. At this point we also did some basic testing to determine how much travel our push-rod would require. The push-rod will be fastened to the factory strut mounting point on the rear trailing arm (as if you were installing a true coil-over kit).

Armed with our measurements, we set about creating our suspension analysis spread sheet. The position of the spring/damper as well as the push-rod in relation to the rocker are critical in maintaining a progressive suspension. When a rocker is introduced between the spring/damper and the push-rod your linkage angles play a role in how much spring rate is actually transferred to the push-rod mounting point. In a linkage system where you have: damper -> rocker -> push-rod you are effectively taking linear motion, transmitting it to rotary motion, then back to linear motion. At the rocker connection points, the effective force transferred into the rocker is ONLY the perpendicular component of the input force. The sign convention determining what is perpendicular is based off the segment between the connection point and the centre of rotation. I have laid out a diagram below identifying a basic look at the forces through the rocker at an instantaneous point in time. 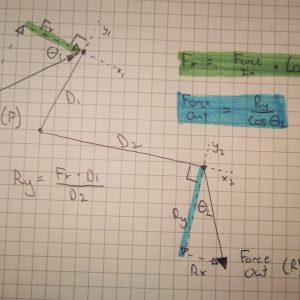 In the push-rod system, the linkage set-up is a bit more complex than a standard link-rocker-link layout. This is because end to end motion does not occur. The end of the damper is always fixed and its link length changes based upon rotation of the rocker. This is what affects the theta-1 value in the above diagram. The end of the push-rod however, does move. This end moves in conjunction with the control arm, so the geometry of the control arm affects theta-2 as the rocker rotates. By developing a spreadsheet which calculates the entire range of motion for all links we could analyze the force plots, as well as look at how angular and linear velocity would relate throughout the system.

In an effort to keep the rambling at a minimum here I feel it is best to move on to some design renders. Writing this post has made it apparent to me that I should create a post explaining in depth, the dynamics and the geometry involved in basic suspension systems one day. That day however is not today as there is a lasagna waiting in the fridge with my name on it. 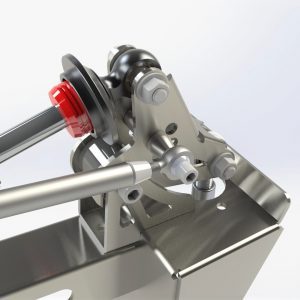 Using our spreadsheet, we tuned the geometry for the rockers and mounting points to suite the progressive loading we wanted to achieve. Using our developed geometry we set about creating our design.

Between the two weld-in strut tower boxes, we have a laser cut and formed cross member. This cross member is located via our formed rocker clevis mounts. These clevis mounts locate from the strut tower boxes themselves. These components all feature “slot and tab” cutouts allowing the assembly to be easily mocked-up for welding. The damper clevis’s locate off of and will be welded to the cross member as well. All of the components used to support the damper and rocker assemblies are designed to be laser cut and formed from thin gauge steel plate. The reasoning for this is to keep cost down and allow for a simple installation. 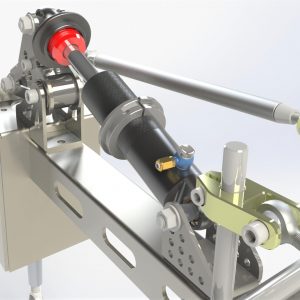 Our rocker assemblies are built around a central bearing sleeve. This sleeve is to be TIG welded between the laser cut and formed side plates. The bearing sleeve features two bearings, one pressed in from each side. Through the centre, a solid turned stainless shaft will mount the rocker assembly to the rocker clevis. The rocker will have the damper fastened through the one end, and the push-rod through the other. Both the damper and the push-rod will feature spherical bearings in each end to ensure there is no compliance during actuation. 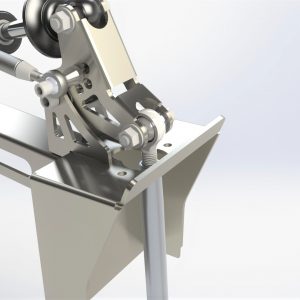 Those with a keen eye will notice this design incorporates a sway bar as well. This rocker actuated sway bar is quite common in formula cars. The difference here, which posed a design problem is that the dampers are opposite to each-other. In a formula car the dampers are side by side actuating in the same direction. This allows the sway bar to simply rotate down (either the forward or rearward) when both wheels actuate in unison and then deflect when the suspension positions differ. It is 3:15 A.M currently, so my sketch drawing skills have now dipped below acceptable. Below I have sketched out the standard parallel damper system with a sway bar. 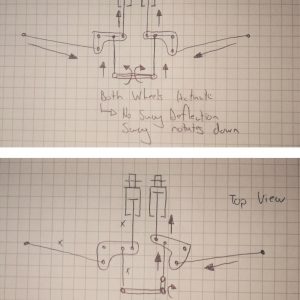 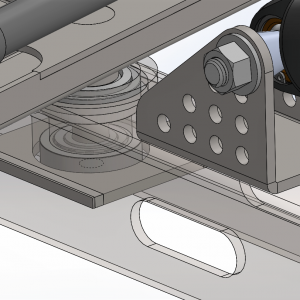 As shown below, upon both push-rods moving upwards, the sway bar unit is allowed to rotate. Upon differential actuation between the push-rods, the sway bar will deflect. This system will be discussed further once we get through the building and testing phase of the project. 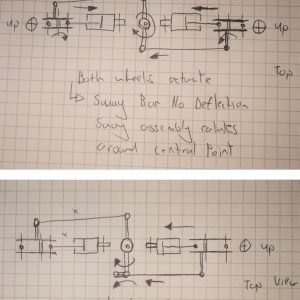 In the coming weeks, we will get the main support structure welded into our test car (strut tower boxes, cross-member and mount clevis’s). Our goal is to get the car working smoothly with just the push-rod damper system. Following that we will implement the sway bar system.

Is this system necessary in an e30? You can answer that for yourselves, but as the title of this post indicates, my opinion is clear 🙂

Stay tuned and have a good night!